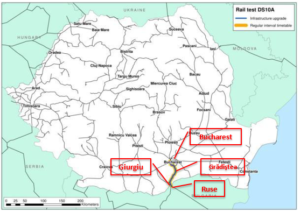 The project regards the rehabilitation of the cross-border railway section Bucharest-Giurgiu, which connects the capital city of Romania with Bulgaria via Grădiştea. The Bucharest-Giurgiu rail line is part of the Pan-European Corridor IX, on the TEN-T comprehensive network. It is a very important link, being the unique connection with the Bulgarian cross-border river port of Ruse, on the Danube River. This project is in continuation with the railway line Ruse-Varna, identified in the FR of Bulgaria.

In 2005, the Grădiştea Bridge collapsed due to the severe damages caused by a flood. Since then, the Bucharest-Giurgiu line closed to traffic. At the moment, trains are allowed to transit through the much longer route Videle-Giurgiu to pass the border between Romania and Bulgaria. The urgency of the rehabilitation of the section is necessary because the traffic diversion from the Bucharest-Giurgiu to the Videle-Giurgiu is overstressing the line, designed for lighter traffic.

The project for the modernisation of Bucharest North-Jilava-North Giurgiu-state border with Bulgaria aims to: